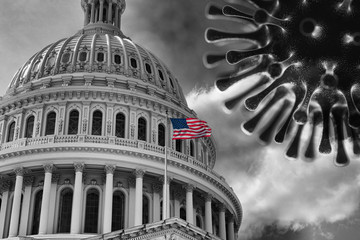 Another round of coronavirus relief package talks began today, as Congress adjourned for the weekend without coming to any deal on the program or a larger emergency stimulus package. The $600 weekly unemployment benefit that helped 32 million Americans stay afloat, officially ended on Friday — leaving unemployed Americans in limbo while Congress continues to debate the vital benefits.

Senate Republicans are proposing a plan to slash the extra federal benefit to $200 per week through September. They would then set the aid at 70 percent wage replacement. While House Democrats have already passed a $3 trillion stimulus proposal in mid-May, called the HEROES Act, that would extend federal benefits through January 2021. It would also give nearly $1 trillion in aid for cash-strapped states and municipalities.

House Democrats passed their version of the next stimulus package in May, a $3 trillion measure that would have extended the $600 boost in weekly unemployment compensation until at least January. The proposal has not been taken up by the Republican-held Senate.

Democrats, have balked at taking up unemployment assistance as a separate measure, arguing Republicans should come to the table for a larger deal on a host of pressing policy items, including more funds for local and state governments. House Democrats’ bill included not only an extension of unemployment but also another round of $1,200 stimulus checks and increased funds for state and local governments.

Senate Republicans, meanwhile, have had trouble negotiating their demands as the conference remains divided on what the next stimulus package should include. Some even expressed doubt that another bill is needed. The divisions remained even after Republicans unveiled their own proposal this week that included $1,200 stimulus checks, funds for schools and small businesses, and a scaled-back unemployment benefits of $200 per week.

In North Carolina, the additional federal benefits have been a lifeline as the state’s maximum weekly benefit is only $350 and the average is just $274 — due to years of the Republican majority slashing benefits.

Last week, Gov. Cooper urged Congress to “put politics aside and do what’s right”, while also pointing to the lack of interest in the Republican-led N.C. General Assembly to extend state UI benefits beyond a weekly maximum of $350 and a maximum of 12 weeks.

With more than 76.8 percent of unemployment insurance payments to North Carolinians coming from federal sources — primarily the $600 weekly benefit — the extension of the federal UI is critical for millions.

From Washington to the N.C. General Assembly, Democrats have proposed plans that make jobless benefits more generous and would take steps to ensure people are supported through and beyond the recovery, but Republican lawmakers continue to undermine these efforts in hopes of salvaging their re-election campaigns.

Bottom Line: For the millions across the country facing financial hardships, hunger or eviction, our leaders cannot ignore their responsibility to lead during a time when swift actions to save lives are needed.