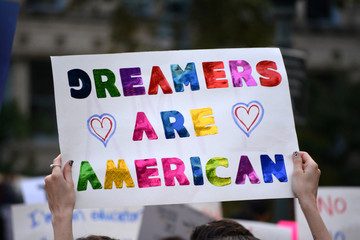 The U.S. Supreme Court ruled Thursday that the Trump administration cannot carry out its plan to shut down the Deferred Action for Childhood Arrivals program (DACA), which has allowed nearly 700,000 young people, known as Dreamers, who came to the United States as children, to live and work in the United States.

In a 5-4 decision, the Court held that the administration failed to “provide a reasoned explanation for its action”, leaving the program alive for now. The Court’s decision is a big legal defeat to Trump on the issue of immigration, and is a win for immigrants who will not have their lives immediately interrupted.

“We still need a permanent solution for our dreamers who are constantly trying to pursue the American Dream,” Jocelyn Casanova said. “It felt amazing to not be in limbo after walking down this path and not knowing where you would end up. Happiness is an understatement, especially during this uncertain time where we have a pandemic still going on, and our Black Lives Matter brothers are voicing their concerns with the justice system. Change is happening, and we should still continue to have these conversations as well as continue to count our blessings.”

Casanova is one of about 24,000 DACA holders who live in North Carolina, and among the 700,000 or so recipients nationwide. She said she is grateful to be in the U.S. and wants to continue to go to school, work and contribute to her community.

DACA is a temporary fix for recipients of the program, who don’t otherwise have a permanent path to U.S. citizenship. Last June, the U.S. House passed legislation that would safeguard the program and provide a pathway to citizenship. The bill has not been taken up in the U.S. Senate.

Still, the Supreme Court news from Thursday brought many people comfort this week.

Since 2017, Trump has attempted to dismantle the Obama administration’s program that deferred deportation in response to the failure of Congress to pass legislation to protect Dreamers.

Last January, Trump demanded a $5.7 billion fund for a border wall in exchange for temporary protections for Dreamers — the shutdown ended with no border wall funding and no legislation on DACA.

For now, more than 24,230 Dreamers out of 700,000 across the country, will remain protected in North Carolina.

The Trump administration has repeatedly attacked immigrants through any means, including increased detention, deportation of immigrants, and separating thousands of children from their parents at the southern border.

While the ruling results in a temporary pause on deportation of Dreamers, the Supreme Court has left open other ways for the Trump administration to end the program, but it must provide adequate reasoning for doing so.

As the Trump administration continues to undermine vulnerable populations, we must continue to fight for protections and equal rights for all of our families, neighbors, and communities.

If you would like to make a donation to groups fighting for immigration rights: