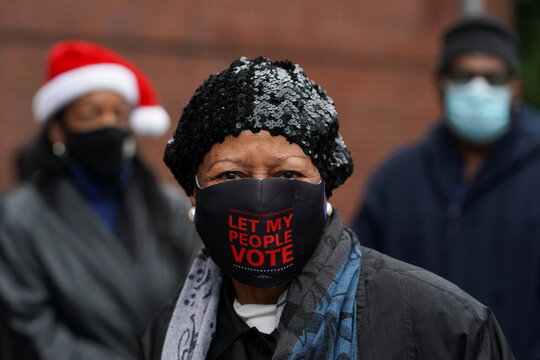 Despite Republicans’ desperate attempts to suppress voters, nearly 160 million Americans voted in the 2020 elections — by far the most in history and a level of turnout not seen in over a century.

With over 66.7 percent of the voting-eligible population casting ballots this year — the highest percentage since 1900 — state and national attempts to disenfranchise voters from Republicans’, did not dissuade voters from making their voices heard.

“We opened the doors to access,” said Adrian Fontes, the top election official in Maricopa County, the largest county in Arizona, where, for the first time, more than 80 percent of the eligible population voted in the general election. It also flipped from Republican to Democratic for the first time in 72 years.

“I think the most telling number is the 165,000 in-person Election Day voters,” Mr. Fontes said about voter turnout in Maricopa County. “When you get over two million people casting a ballot and less than 200,000 of them are actually walking in on Election Day and casting a fresh ballot, that’s important.”

“Voters really thought about how they were going to vote, and many had a plan and executed on that plan,” said Kim Wyman, the secretary of state in Washington.

According to a recent poll from the Pew Research Center, 94 percent of voters said that voting in the November election was “easy” — signaling to the expanded access to safe voting options and increased voter education efforts by activists and organizers across the country.

In North Carolina, over 75 percent of eligible voters — 5.54 million people — cast their ballots and more than 1.8 million new voters registered compared to 2016.

According to the North Carolina state board of elections, Democrats expanded their voter base by nearly 500,000 compared to 2016, while Republicans gained about 400,000 more voters.

The 2020 elections proved that despite all the obstacles, we, the people, will show up for each other and our nation. From opposing expanded voting options, and defunding the postal service, to limiting constituents’ access to ballot boxes — these tactics by Republicans to undermine and deny voters their constitutional right to vote, did not stop our communities from being heard.

Bottom Line: For Republicans to increase their voter suppression efforts during a raging pandemic, record unemployment and racial injustice, makes it all too clear that they aren’t afraid of voter fraud, but rather the power of the people.

NCGOP Cuts Education Funding in the Middle of the Night