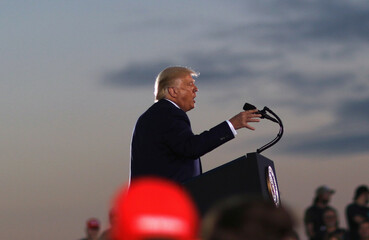 Trump will be making a stop in Greenville, North Carolina on Thursday — less than two weeks after he was hospitalized with COVID-19. The campaign rally in eastern NC comes as Trump held a rally today in Florida, despite at least 34 White House staffers “and other contacts” infected with Covid-19 since the Rose Garden ceremony.

Few attendees at the White House event unveiling Trump’s Supreme Court nominee, wore masks or kept their social distance in both the indoor and outdoor gathering — resulting in what Dr. Anthony Fauci identified as a “super spreader” event.

Trump’s multiple rallies despite his recent hospitalization with COVID-19 comes as more than 7.7 million coronavirus cases have been reported in the U.S., and at least 214,108 have died.

The nation’s top infectious-disease expert criticized the Trump campaign’s public health practices on Monday, saying in an interview that the president’s decision to resume large-scale rallies without adequate social distancing was “asking for trouble.”

In an interview hours before a maskless President Trump addressed a raucous and largely bare-faced crowd at a rally in Florida, Anthony S. Fauci told CNN that it is unwise for the president to stage a campaign event that puts people in close quarters without face coverings.

“We know that that is asking for trouble, when you do that,” Fauci said.

According to the Pew Research Center, Biden has a 17-point advantage over Trump when registered voters were asked who could better handle the public health impact of the coronavirus outbreak.

Rather than mitigating risks, Trump continues to be reckless and will endanger Americans until the election season is over. Despite COVID-19 cases rising in 28 states, Trump has repeatedly shown his failure as a leader and his lack of concern for those who have lost so much during this pandemic.

Bottom Line: Months of ignoring experts, spreading false claims and holding events with large crowds, without wearing masks or social distancing, shows Trump’s lack of judgement and responsibility to react in a crisis It’s dangerous, reckless, and the people are paying the ultimate price for it.