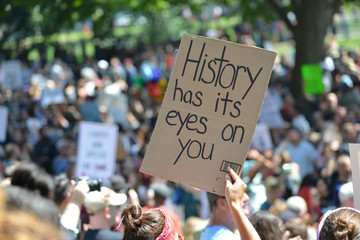 For nearly two weeks, protests and demonstrations have been held across the United States and the world, calling for an end to racism and police brutality against Black Americans. The widespread movement is one of the largest mobilizations, spawning from the murder of George Floyd, an unarmed Black man who was killed by police in Minneapolis, Minnesota, on May 25.

Protests have taken place in every state across the U.S. and in numerous countries across the world to call out unchecked police violence against people of color, but the movement doesn’t stop there.

Systemic racism is not solely an American problem, nor is it something new. Black Americans have experienced an environment of racialized poverty and inequality for decades. In the U.S., the systematic problems stem from 400 years of oppression and inequality marked by the first kidnappings of Africans from their homes and forcing them onto slave ships that landed on indigenous soil.

After the abolition of slavery in 1865 with the passing of the 13th Amendment toward the end of the Civil War, African American communities were heavily policed by law enforcement officials, especially in areas that passed black codes — laws that restricted property ownership, employment and other behaviors.

The Ku Klux Klan and other hate groups terrorized black communities, carrying out lynchings and destroying black schools. Some law enforcement and other government officials became KKK members, especially in the South.

And as African Americans protested against segregation and other racist laws in the 1960’s, law enforcement officials were often called in — mirroring images of police suppressing peaceful activists today.

It’s unconscionable that so many Black Americans, George Floyd, Breonna Taylor, Tamir Rice, Philando Castile  and others, can be murdered in our streets today by either officers or vigilantes, in the name of law and order just as they did decades ago.

Protests are happening because Black Americans and those who value their lives are raising their voices for a better future, as they did decades ago. These marches are in an effort to build a world of peace and justice in which people from every racial group thrive.

And the fight against racism and of the discriminatory system that has plagued this country for centuries, requires all of us.

Joining the fight means processing guilt and wrestling with privilege. But there’s also room for hope and community. The society we’re building celebrates our differences and provides a welcome place for all to be part of the multi-racial majority.

By joining together with others across racial lines, we can reject those trying to divide us, reduce racism, and nurture a society that equally values each and every family, whatever our color, race, or nationality.

Bottom Line: To dismantle the system of white supremacy that has warped our humanity and empathy towards others for centuries, we must commit to transformative change.

We must commit ourselves to examining our own anti-Blackness and internalized white supremacy. We must educate ourselves on the history of our nation, hold each other accountable and commit to no longer perpetuating the culture and systems that continue to suppress communities of color. We need you to join us in this effort and call it out whenever we see it.

We must vote for politicians who do not uphold these racist values. We must reimagine public safety and pour our collective resources into education and health systems that will empower communities of color.

As a society, we can all be a part of this change that ensures all our families and all our communities thrive. Together, and only together will we be able to heal and move forward toward a society that cares for everyone.

If you would like to make a donation to groups fighting for racial justice: