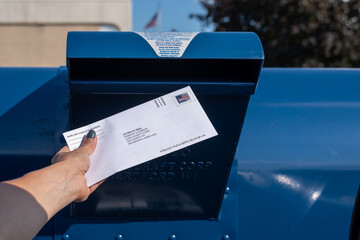 Litigation over absentee voting in North Carolina has taken quite a few twists and turns over the past few weeks. The cause? Republican state lawmakers and Trump’s campaign intervening in the voting lawsuit that would have eased absentee voting rules.

Through letters, tweets, disinformation and lawsuits, the Trump campaign and its GOP allies are going to new lengths to actively disenfranchise voters in order to maintain their own grip on power.

From The Associated Press:

“It’s clearly based on an overall strategy to disrupt the election as much as possible,” said Barry Richard, who represented President George W. Bush’s campaign in the 2000 Florida recount. “You’re really seeing a broad-based, generalized strategy to suppress the vote by the Republican Party.”

Rick Hasen, a law professor at the University of California, Irvine who has been a frequent critic of Trump’s approach to voting, said there’s a difference between campaigns talking to election offices and trying to pressure them.

“To know the rules of the game you’re going to play under, it’s different than trying to work the refs,” Hasen said. “All of this conduct is so beyond the pale — it’s hard to put in context because there’s been nothing like it in modern American campaigns.”

Based on a review of thousands of pages of court records and interviews with more than 100 key players, a New York Times Magazine investigation found that there is an extensive effort to gain partisan advantage by aggressively promoting the false claim that voter fraud is a pervasive problem.

“What we’re talking about is an effort to deliberately place these barriers in front of people. And many may be discouraged from trying to cure, or making it impossible for them to cure, a deficiency,” said Irving Joyner, a law professor at North Carolina Central University.

For months, the Trump administration has used GOP allies, lawyers, the Postal Service and even armed officers in order to disenfranchise communities across the nation. From his 2016 election, in which he claimed he had lost the popular vote because of fraud, Trump has continued to wage baseless accusations.

And with an approval rating trailing behind Biden, the only thing Trump and his GOP allies are afraid of is the accommodations prompted by several states to enable more people to have their votes counted.

Bottom Line: The Trump administration and Republican leaders don’t fear voter fraud, they fear the collective action that voters have in taking away power that these leaders have recklessly vied for over the interests of the people.